Waiting is alway waiting – whether you are 6 or 60… waiting for the amazing thing to happen always feels like an eternity. At 6 you count down the days until you’re opening all those packages under the tree having not slept for more than 3 hours on the evening prior. At 60, you count down the days until you’re sitting in front of the Notaire, pen in hand, and signing the contract for your new French home. And finally, after countless house viewings, thousands of air miles, a lot of fois gras, and very muddy boots, our Christmas Day had arrived early on December 7th – we signed for Le Tuco! Our massive present was fully unwrapped and just like you say when you’re 6 (or 60) “it’s exactly what we always wanted!!!”

Key in hand, obligatory photo in front of the Notaire’s office, euphoria beyond belief, and we were off to our first night’s stay at Le Tuco! 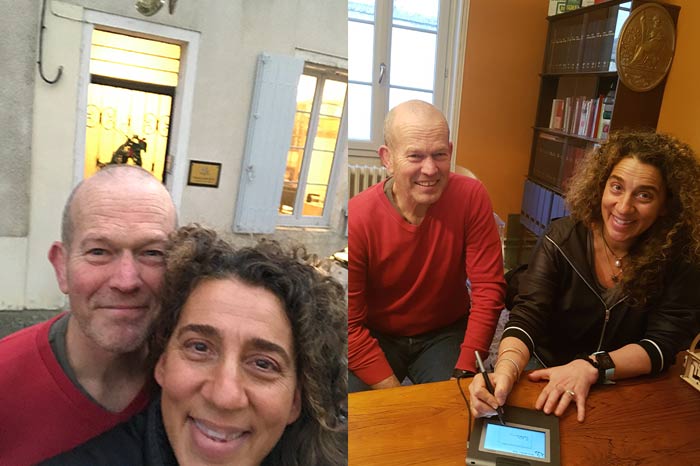 We have driven up to the house no less than 20 times…and each time has been like the first – a cocktail of awe and awesome. You feel an overwhelming sense that somehow, you’re living in someone else’s life. These things only ever happen to others, not to you…until you pull up, park, unlock the door and realize every tile, blue shutter, old beam, and sprig of lavender — is yours! And, like a sign from above, we also had a welcome committee of 1…meet Hubert. 4 footed, wonky eyed, blotched with gray and white, Hubert was the infamous cat that the previous owner had mentioned. A “he” named Hubert – until the previous owner realized “he” had kittens. So now Hubert is a “she” with the name of a “he”. Regardless, we were thrilled as it was a sign that we were officially welcomed to Le Tuco as one of it’s own.

It was going to be en exciting first night – no heat, no hot water, no food nor utensils but cards from well wishers and a bottle of Veuve Clicquot would surly keep us warm and happy for the night. And it did! Best night’s sleep ever as we blissfully sat on the stoop in the following loop: “it’s so quite here, it’s so quiet here, it’s so quiet here.” The sun set, the moon rose and we gazed out over mother nature’s clock feeling like time had stool still for just this one night. 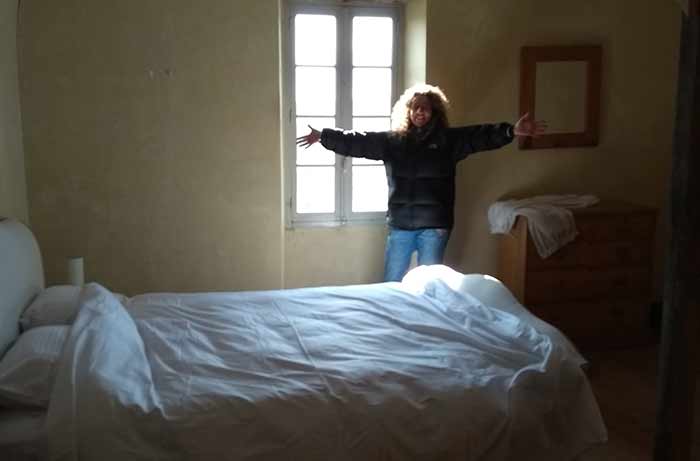 In the morning, we woke to distant sounds of roosters (which replaced the sounds of car alarms) and church bells (which replaced the sounds of planes on their final approach into Heathrow). It was a sumptuous night giving way to a sunny day and we were about to meet the A Team…the team of Artisans who would be translating Le Tuco from best to better. The team who would look at the house from the inside out as we all held hands and agreed to listen to Le Tuco talk and parley her voice into a year round home. It was a pinch yourself moment as we all discussed windows, heating, plumbing, and septic tanks etc. I never thought these things could be so interesting… until they were about our own house and spoken in French… which makes everything sound better.

As the day came to and end, so did our first 24 hours with Le Tuco. Feeling homesick even before we left the building, we knew this time was different. This time Le Tuco was ours and now that we knew Hubert was there standing guard, we felt calm as we said “A Bientot!”

* Please note the cat pictured is not the real Hubert and indeed any resemblance to any cat called Hubert alive or dead is purely co-incidental.