The wed, the wait, the wow

The Wed: The dream was to one day marry in France.  For years we visited our dear friends who bought a chartreuse in Saint Germain De Belves. And for even more years we would sit in their pool, eat their cheese, pluck figs from their trees, feed stale bread to their sheep and dream about a French wedding at their French home..And on July 16th, 2011 the dream became a reality!  We said, “Je veux” in France… Of course, none of my American friends knew what “Je veux” meant but Keith and I knew!  And we also knew that marrying in France brought us one step closer to our French life.

The journey to the wedding wasn’t easy as we had to get what felt like a Baccalaureate in French bureaucracy.  The seemingly unending stream of papers, signatures, translations, meetings and explanations tested our stamina… but, in the end, we prevailed and held the French gold medal in admin. And, as we sat with the mayor at 11:00am on the day before our wedding, drinking a pastisse and listening to his dogs bark endlessly outside the kitchen door, we knew we had made it to the wedding finish line. Paperwork done, signatures signed, minstrels hired! “Nous voulons!” 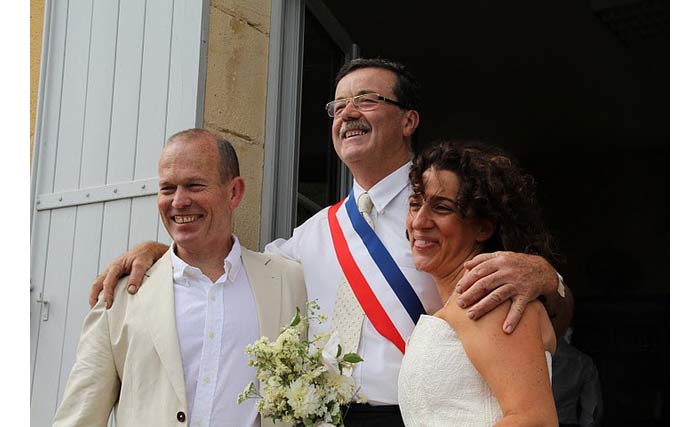 The Wait: With the wedding now over, the wait would begin.  6 years of hatching a plan to some day return to France in some way.  I can recall Keith often saying, “I don’t know when; I don’t know where; I don’t know how…but I do know that France is in our future.”  It was a lot of “I don’t knows” but the good thing about our wait was that it allowed the dream to breathe, to bake, to brew.

Our French house soufflé…just a mixture of a few main ingredients that would produce one magical result.  We let the dream cook for 6 long years until we finally pulled our French fantasy out of the oven — fully formed and ready to enjoy.  It was time to take our bite out of France and have our own little slice of French pie.

The Wow:  On August 21, 2017 we arrived in the Gers for the very first time on a very first visit.  It was like coming home — yet we never lived there.  We were wow’ed as we felt like Christopher Columbus discovering a new land. It was love at first sight and with every great love story ours was from minute one. It started with the landscape — big, rolling, green, and silly with sun flowers.  It then moved onto the architecture — yellow stone, blue shutters and very large spaces between the houses.  And it ended with the traffic – there was none!  This was our Oz and now all we had to do was find our Emerald Kingdom!

We looked at 47 houses from 238 websites all of which looked the same. Like Goldilocks, there was something amiss with each and every one of them — too large, too small, funny smelling, low ceilings, no light, bad karma. And then we came across bliss…and BLISS — the local estate agents who hand pick their houses like unique flowers to form a bouquet of properties that make you dream.

One of those flowers was Le Tuco… and boy did we dream.